15 Minutes in Fleet Street: a short walk from fleet street to the strand

In just 15 minutes in Fleet Street, walking down to the Strand, there’s a whole host of historical buildings and sites to catch your eye. Don’t hop on the tube to Covent Garden- walk in the same amount of time, and see all of this in just 15 minutes. 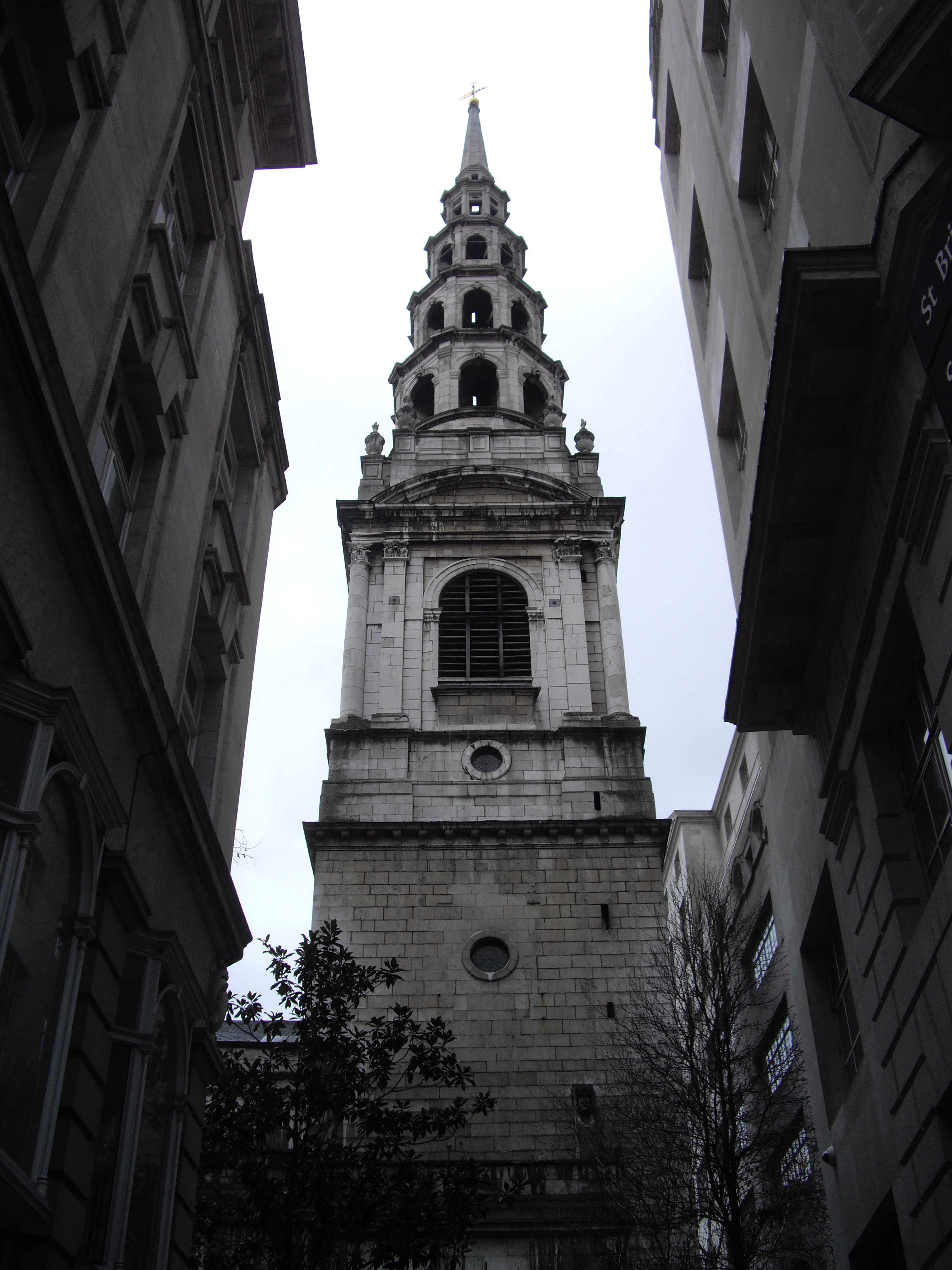 Starting just off Fleet Street itself, on St Bride’s Avenue, sits the beautiful St Bride’s Church. Designed by Christopher Wren, as was much of the city following the Great Fire of 1666, it boasts Wren’s highest spire. Some sources claim that it was also one of the buildings that Wren’s later famous apprentice, Nicholas Hawksmoor, assisted with, but some of the dates surrounding this seem dubious.

The tale most often told of this spire is that it inspired the creation of the modern wedding cake by baker’s apprentice Thomas Rich. As with much of London’s history, it’s a nice enough tale that it veracity is not too important to most people, and with its tiered layers and apt name, it certainly has a ring of truth about it. Benjamin Franklin designed the lightning conductor for the unique steeple.

St Bride’s is also important in the history of Fleet Street’s most famous profession: printing. After the death of the wealthy William Caxton, the first man to introduce the printing press to England, his apprentice Wynkyn de Worde needed to make his products more commercially available. To that end, in 1500 he moved the press from Westminster to next door to St Bride’s on the grounds that the concentration of churches and lawyers here would provide plenty of works to be printed. This was the first printing shop on Fleet Street, but others swiftly joined him and Fleet Street remained the centre of printing and the press until the 1980’s, with St Bride’s being known as the church of the press.

While not a particularly noteworthy building, 37 Fleet Street is Hoare’s Bank, England’s oldest private bank. Founded by Richard Hoare in 1672, it is still run by his descendents. They have been at their present location since 1690. Famous client have included Samuel Pepys, John Dryden, Lord Byron and Jane Austen.

Directly opposite the successful Hoare’s Bank is an altogether less pleasant place. While there is some doubt as to which parts of the tale of Sweeney Todd, the murderous barber who sold his victims’ bodies to the pie shop down the road, are true, if indeed any of it, the likelihood is that if he did exist, his shop was set up in 1785 at 186 Fleet Street, next door to St Dustan-in-the-West. The most evidential aspect of his story is witnesses saw a barber arguing with a patron outside his shop at 186 Fleet Street, then cut his throat with a razor before running off down the alley by the shop. In the 1800’s the building was demolished and more bodies were discovered in the cellar of the shop, and there are tunnels that link 186 with what was a pie shop in Bells Yard. However, it does seem unlikely that he killed the 160 people often quoted without there being a more thorough record of him and his trial. This building is now most noticeable for the large Dundee Courier’s logo down the entire frontage.

While this church, originally built in 988, did manage to survive the fire of 1666, it sadly still fell foul of the new Industrialists desire to make everything as new (and have wider roads), and it was rebuilt in 1831. One original aspect that remains is it’s clock. Built in 1671, it was the first public clock in London to have a minute hand, but more impressively, it has two giants who strike the hours and turn their heads. In the courtyard there is a statue of the mythical King Lud, founder of the city of London, and also the only remaining statue of Elizabeth I in the city. It is thought to be the oldest outside statue in London, carved in 1586, and was rescued from the old Ludgate when it was demolished. Adjacent to Elizabeth is a bust of Lord Northcliffe, co-founder of the Daily Mail and Daily Mirror, showing again how embedded this area is with printing history. Finally, inside the church is a true monument to unity. This is the only church in the country with chapels or shrines to all seven major old branches of Christianity: Old Catholic, the Assyrian Church of the East, the Romanian Orthodox Church, the Anglican Church, the Oriental churches, the Lutheran and Reformed Churches and the Holy Roman and Catholic Church.

This Crusader-built church was used in the book and film of Dan Brown’s ‘The Da Vinci Code’, but don’t let that put you off. The oldest part of the church, the round, was built by the Knights Templar in 1185, and was entirely circular. Dan Brown suggests this is due to Paganism and in honour of the Sun, but records suggest that it is in fact in honour of the Holy Sepulchre in Jerusalem. This part of the church is one of the oldest buildings in London, only Westminster Abbey and parts of the Tower of London being older. The chancel was added and later extended in 1240 after Henry III wished to be buried there. However, by the time he died in 1272, he had changed his mind and was buried in Westminster Abbey. The main reason the church makes such a good location for Dan Brown’s thriller is the ten effigies of Knights in the round. These were long thought to be graves, but, upon restoration after the church was hit by a WWII incendiary bomb, no bones were ever found. Also worth noting are the fascinating gargoyles heads throughout the round. While it has long been the tradition for masons to be creative and humorous with gargoyles in tucked away locations, these are plentiful and in plain sight. They are often pulling grotesque faces, or are tweaking the devil, or in one case it’s just a goat in a mortar board. The Templars fell out of favour, and all the land around the Church was granted to the Knights Hospitaller. They rented the land to two groups of Lawyers, and in 1608, James I granted the land to the two Inns of Lawyers in perpetuity on the condition they provide for the upkeep of the church. The church is accessible through a gateway off of Fleet Street, but is located in a maze of lawyers offices. It is not always open, so check on their website before making a special trip.

One exit from Temple Church onto Fleet Street comes out directly underneath this impressive building. One of the only buildings on Fleet Street to survive the Fire, it was built in 1610. It was a tavern, called the Prince’s Arms for the next thirty years. Due to this, and the unusual three plumes design on the front of the building, rumours surround the building as to whether it was built for the Duchy of Cornwall, and that a room was set aside upstairs for Prince Henry when he became Prince of Wales. Sadly, however wonderfully this tale fits, there is evidence that the tavern was built and called the Prince’s Arms two years before the boy was even born. 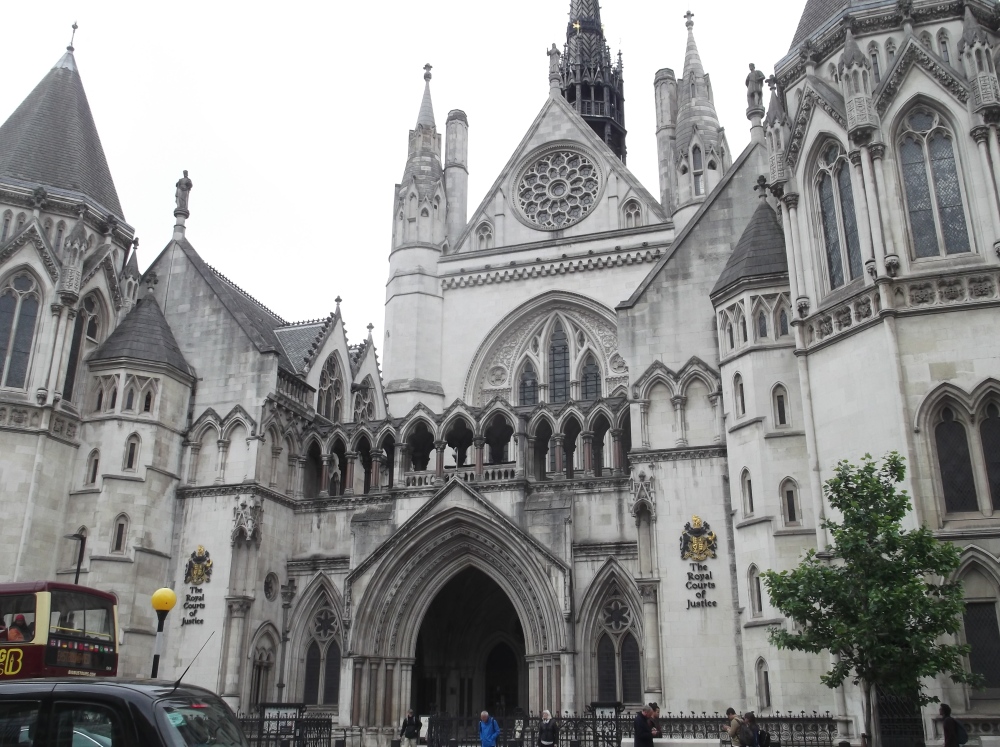 The Royal Courts of Justice

This is a huge and imposing building, just as Fleet Street turns into The Strand. It was designed and built by George Street, who was fittingly a solicitor turned architect, and opened by Queen Victoria in 1882. For all it’s grandeur and bustling lawyers, don’t let it intimidate you; it is a public building and you are welcome to have a look inside. It has over three miles of corridors and a thousand rooms though, so careful you don’t get lost. You can also watch any cases, excluding familial ones, although this is rarely as exciting as it seems.

There’s nothing but a plaque on a RBS left here to mark the Devil Tavern, but it’s worth noting all the same. Originally named St Dunstan and the Devil, it became known as the Devil, and was a well-known and longstanding tavern as far back as 1563. Here was where the famous Apollo Club met. It’s members included Shakespeare, Ben Jonson, Jonathan Swift and Samuel Johnson. Sadly, the tavern was pulled down in 1778, although poems and rules written by Jonson for the club still remain.

From one bank to another. The Law Court branch of Lloyds, at 222 The Strand, is housed in a simply stunning building. Even if you just poke your head into its atrium, the beautiful and extravagant tiling, not to mention the flying fish water fountain, really do mark this out as a bank apart. It was originally built as a restaurant for lawyers in 1883, but had been bought by Lloyds by 1895, and was home to the newly acquired Twinings branch of Lloyds. While operating as a restaurant it had the first air conditioning in London, consisting of bellows powered by two ladies on bicycles pedalling away down in the cellar.

While this is the same Twinings as who ran the bank acquired by Lloyds in the previous paragraph, this is what they’re most famous for: Tea. In 1706, at the height of London’s coffee boom, with over 2,000 coffee shops in the city, Thomas Twining decided to lay his money against the odds and bet on tea. The family are still selling their now-famous Twinings Tea from the same shop at 216 The Strand. Not only are they regarded as the first company to blend Earl Grey in the UK, but they also have the world’s oldest continuously used logo, designed in 1787. The shop has a range of teas, coffees and hot chocolates for sales, a tiny cafe at the back and a small display of tea history.

One of the two ‘Island Churches’ at the end of the Strand, this is the main church for the RAF. Another Wren design, it’s other, contested, claim to fame is it is the church at the beginning of the nursery rhyme ‘Oranges and Lemons’. While St Clement Eastcheap also claim to be this church, this church does ring out the tune of the rhyme three times a day. Not conclusive, but nice.

The second of the ‘Island Churches’, this is the Church where Charles Dickens parents married in 1809. It is one of the few churches not to have been hit during the Blitz, so has more period fixtures and fittings. It is also said that this is where Bonny Prince Charlie renounced his Roman Catholic Faith and become an Anglican during a secret visit to London in 1750.

Somerset House and the Courtauld Gallery

Another of London’s grand buildings, built precisely because Londoners were moaning there were no grand public buildings. It’s been home to the Royal Academy, the Royal Society and the Society of Antiquities. It’s a cultural hothouse, with exhibitions, concerts and events on frequently. In winter, it’s large fountains are changed into an ice rink. It’s most famous current inhabitant is the Courtauld Gallery, having been there since 1989. This is a collection for the study of art, and contains some real gems including Van Gogh, Van Dyck, Rubens, Cezanne, Degas, Gauguin, Goya, Botticelli, Matisse, Renoir and Turner. The current exhibition running until 15 Jan 2012 features Spanish drawings from Ribera to Picasso. The usual cost is £6, but it is open free on Mondays. Now how much of that would you have missed rushing from St Paul’s to Covent Garden?